There’s a Light Horse In There

We’ve had blistering hot feels-like-July weather all week.  I have been wanting to ride but the weather has kept us indoors, other than morning and evening chores.  This morning was slightly cooler, with clouds gathering slowly, so even though the thermometer said it was a bearable 84F, the humidity was high.  By the time I had Tex groomed (not thoroughly, even) and tacked up, sweat was running down my back and I felt a bit woozy.  We stood in the shade for a few minutes until the nausea passed and then headed for the freshly mown back pasture.  Because there are trees.  The dressage court is sand and direct sun so that was not going to work. 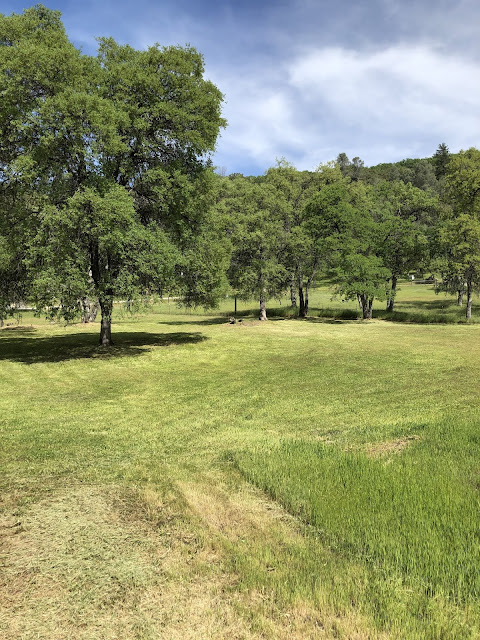 Besides, Tex and I like riding under the trees on the grass.

My goal was simple: get a light walk to trot transition.  That’s it.  Tex is a sensitive horse by nature but he’s a bit of a brute under saddle.  Clearly, he was never ridden with feel.  He has no concept of a half-halt and stopping him is like stopping a Mack truck.  Abs, seat, arms — and eventually a “did you say stop?”  Not that he’s running away, mind you.  This is at a walk.  It is part of the reason why I don’t work with him much at trot and canter yet.  If you ain’t got brakes, you ain’t got nothin’.  Similarly, getting him to move off or transition to trot requires a kick.  Ugh.

In ten minutes, we got a lot done.  The first transition went like this:
1. Lighten my seat: nothing
2. Light squeeze with my calves: nothing
3. Heels into his side lightly: nothing
4. Digging into his sides with my heels: off we go

Second try:
1. Lighten my seat: nothing
2. Half halt and light squeeze with my calves: ear flick
3. Heels in lightly: off we go

Third try:
1. Lighten my seat: ear flick
2. Half-halt and light squeeze: off we go
3. Lots and lots of praise from me and... suddenly we are cantering; a lovely balanced canter.  The FIRST balanced canter on this big red over-achiever. 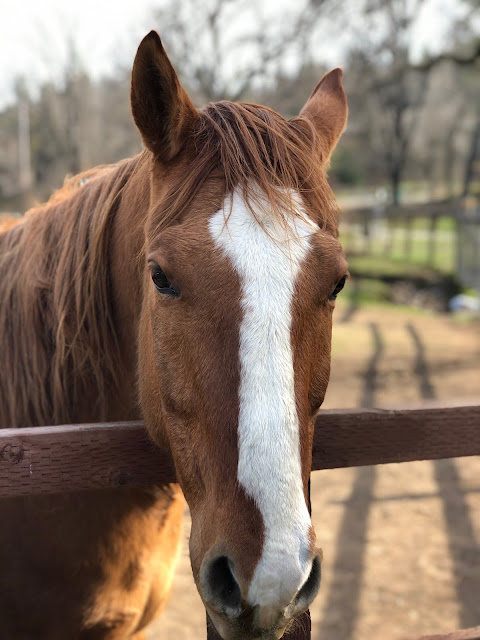 And Brett, who was riding Luek, missed it.  So, I had to ride over and tell him all about it and then we called it a day.

It’s almost impossible to keep track of the days anymore; they run together in a continuous thread of sameness.  I rarely leave the ranch — a weekly pick-up at a local farm for produce, a bi-weekly run to the grocery store for staples, maybe a monthly stop at the nursery or irrigation shop, and that’s it.

When I was working, I put over 30,000 miles on my car each year.  Now, I’m lucky if I drive it once a month.
We have two baskets of masks in the mud room.  One for clean, and one for used.  We carry a bottle of Lysol and a rag with us in the car.
I haven’t had a haircut since March 3rd.  Pretty soon, I’ll be able to put it in a pony tail.
I have strange dreams at night; dreams of a garden with a patchwork of safe garden beds.  Gradually, over the course of the dream, the safe garden beds shrink and disappear and just the deadly ones are left.
I know we have to get people back to work.  We need to find our way to a new way of living with this virus.  But, I’m scared of going too fast.  I see people flooding local bars and business without masks and no distancing.  I see photos of people with snarling mouths and glaring eyes, demanding the removal of all restrictions.  And I feel threatened.
So, I garden and bake and paint.  During the day, I focus on my life here on the ranch and try to ignore the rest.  And then, at night, I dream.
How are you doing?

Sage Gets it Done

We have a morning routine and Sage knows it well.  Brett is wide awake the second the bedroom goes from dark to barely grey.  Me, I wake slowly.  So, while Brett is up and letting the dogs out and putting together the horses’ vitamin buckets, I stretch lazily in bed and think about my day.  After 20 minutes or so, I am up as well.  One of the joys of retirement is that I don’t have to stumble out of bed, half-awake, and head off to work — getting coffee half-way there, when I am waking up.  I savor those 20 minutes of leisurely rising.
While I am easing into the morning, Sage follows Brett around while he feeds the horses.  About the time Brett starts cleaning the first pasture, I am outside.  Sage is waiting for me on the porch and stays at my side while I muck the long pasture and then check on the garden. 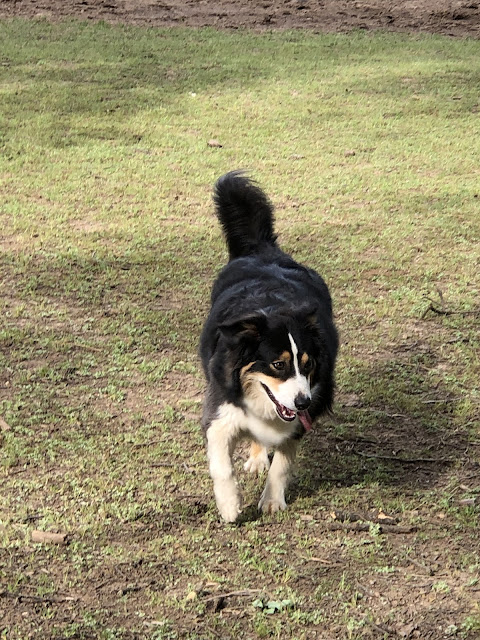 Then I head into the house for breakfast and Sage heads off, with Kersey, to find squirrels.
The other morning I was at the far end of the long pasture with Sage by my side and Brett was finishing up in the front pasture.  He called Sage — which is highly unusual.  I wondered why.  Sage glanced at me quickly and then she was off; 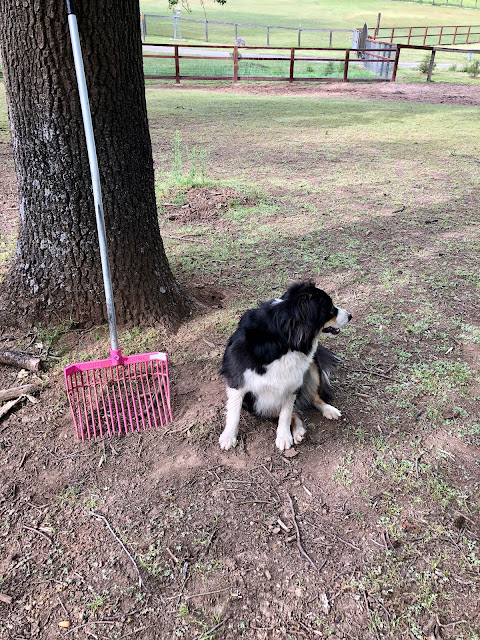 all the way down the pasture to the gate 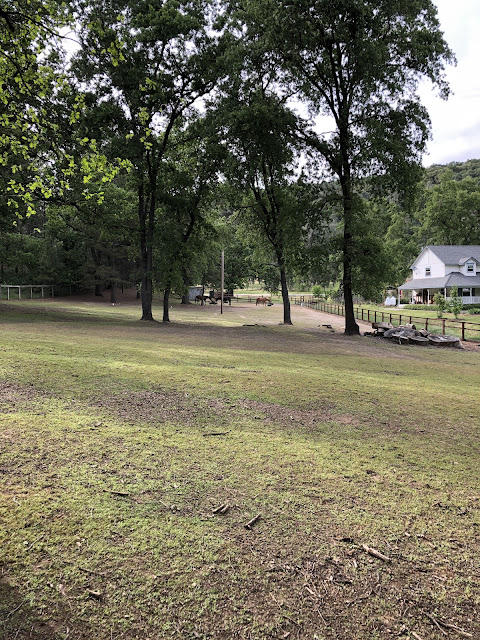 where there is an opening for her to exit, 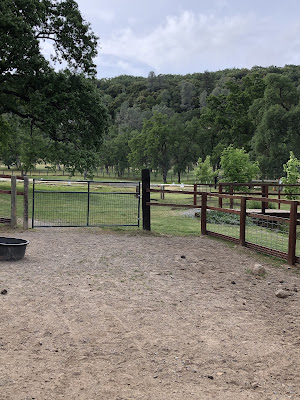 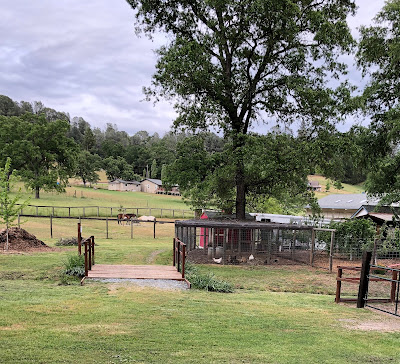 past the chicken run, 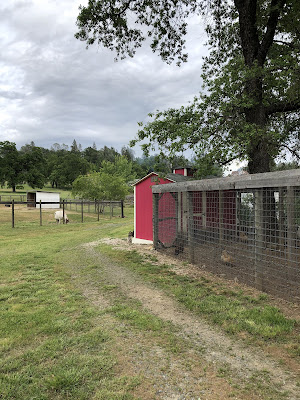 skidded around the corner, continued past the pasture and the barn, reaching Brett between the round pen and the agility arena. 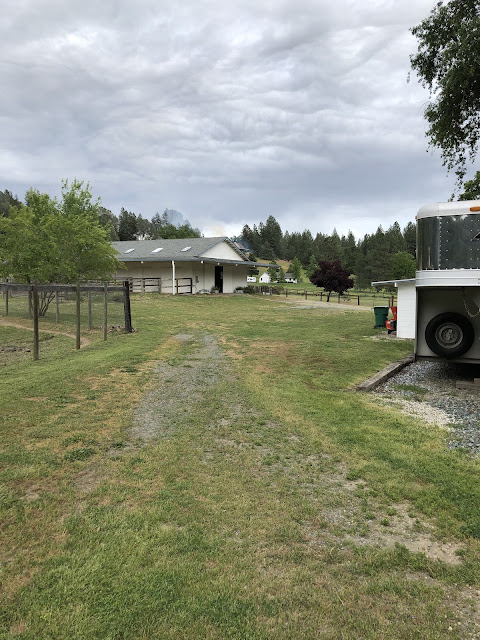 Next, I saw Bear walking down the pathway between the goat area and the agility arena.  He was on the wrong side of the fence and his goat buddies were watching enviously...until Sage arrived.  Bear had slipped out of the pasture behind Brett when he pulled the muck cart out and had ignored Brett’s efforts to get him to go back inside.  Sage went to work.  She leapt around Bear, barking and crouching and wagging her tail like mad.  Bear tried to head-butt her and then gave up.  Brett opened the pasture gate and Sage herded Bear into the pasture.
Maybe I’ll enroll Sage in a herding class when she finishes obedience training.  Something tells me she would enjoy it.
Posted by Oak Creek Ranch at 7:57 PM 1 comment:

Email ThisBlogThis!Share to TwitterShare to FacebookShare to Pinterest
Labels: Sage

The goats wondered what the heck was going on.  Bear watched intently from the goat platform, where he was high enough to see over the fence, as the donkeys approached. 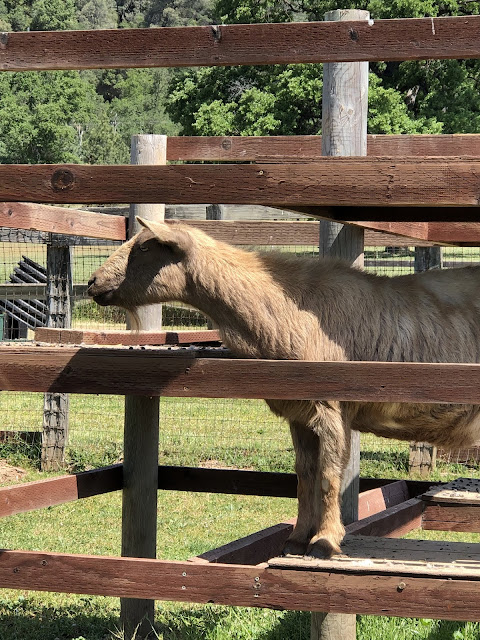 Luek watched from his pasture. 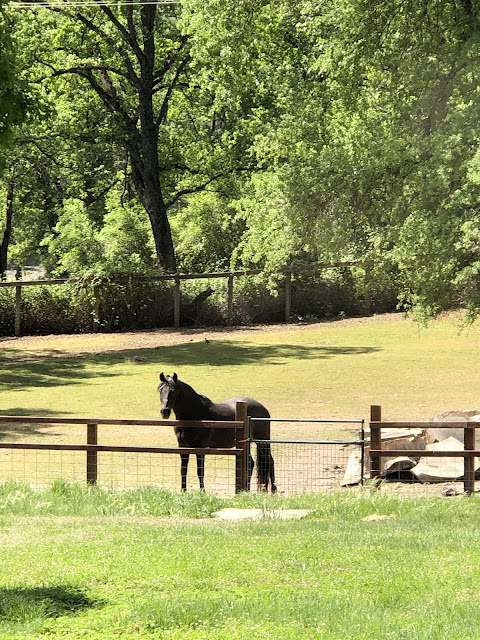 Further down the pasture fence, Tex and Lucy kept an eye on developments as well.  So much commotion, so much confusion. 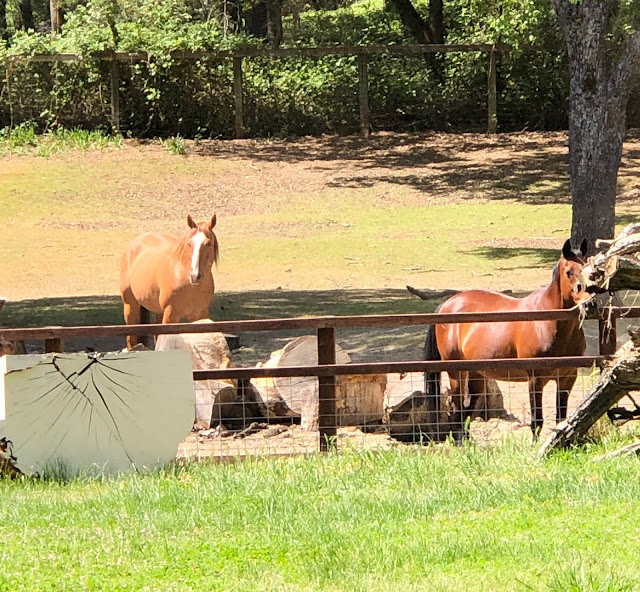 Why were the donkeys out of their pasture?  Why was Tuffy doing circles around Annette like he was being lunged, while Finessa was led docilely behind by Brett?

And then, a few minutes later, what were they doing in the front pasture?  With the goats?

The donkeys, themselves, were pretty chill about the move to their new pasture.  I expected them to be lively, given that they have been in the “donkey pasture” for the past seven years.  We figured it was time for a change.  Pistol and Flash like the donkey pasture, where they have been hanging out lately, eating the grass that the donkeys can’t eat fast enough to keep under control.  When the donkeys spotted the goats, they did get a bit more animated.  For a minute.  The video is best with sound on so you can hear the donkeys voicing their opinion of the goats.

They’ve been together for a few hours now.  The donkeys are grazing and exploring.  The goats are grazing and keeping their distance from the donkeys.  This pasture has two run-ins — one for the donkeys and one for the goats.  Pistol and Flash were not sharing the one run-in that is in the donkey pasture so the donkeys were left without a shelter.  And they love being in their shelter.  This way, they have a shelter and a large pasture, and something new to think about.
Posted by Oak Creek Ranch at 1:47 PM 3 comments:

The garden continues to bloom, with lilacs and iris taking over where the daffodils left off.  I struggled to grow lilacs at Aspen Meadows but they never really did very well; a few sad blooms if I was lucky.  Most years, nothing.  Up here, we have perfect lilac conditions and they grow like weeds.

When my mom died, I planted three in her memory.  I’m not sure if she loved them or not, but my dad always talked about lilacs blooming when they got married at my mother’s parents’ house in Illinois.  So, I have always associated lilacs with the stories of their wedding although her stories were more about not being allowed to wear an off-the-shoulder wedding dress — so she got married in a very smart suit that she sewed.  And hated.  Don’t you love family stories?

A few years later I added a double white lilac to cover up the corner of the garden fence by the chicken shed. 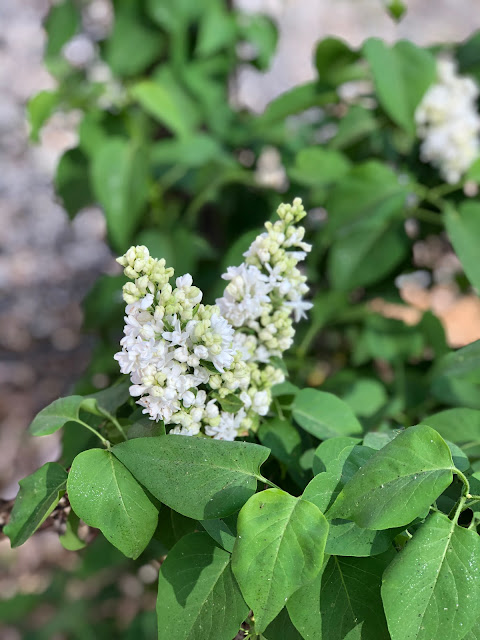 And, just this past year, I planted three dwarf lilacs in the new front planter.  They are too tiny to show up very well in the photo.  There is one in front of, and one behind, the glorious yellow iris. 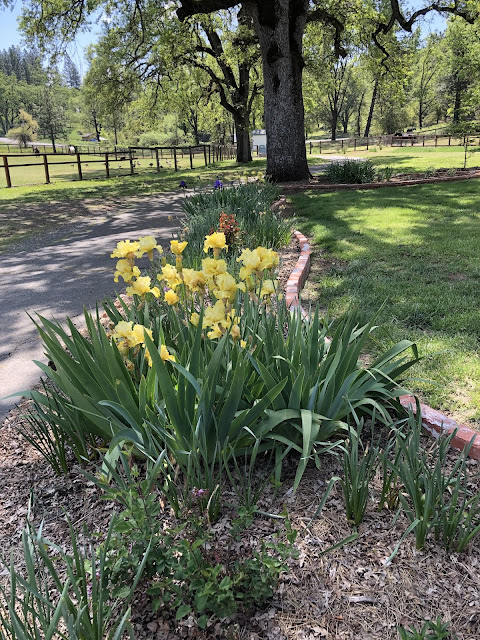 Am I addicted to lilacs?  You could say so.
Posted by Oak Creek Ranch at 9:48 PM 2 comments:

Oak Creek Ranch is home to many species of birds. Some are here all the time like robins that hop around in the pasture while I do the morning chores, woodpeckers, blue jays, doves and finches.  Others are here for a month or two, stopping on their way to other places.  These include Canada geese, ducks, yellow and white crowned sparrows, juncos, grosbeaks and towhees.  Then there are the rare visitors —  sometimes a sharp-shinned hawk will stalk the garden, or we hear an owl hooting at night.

Last year, I spotted a Bullock’s oriole in the cherry tree.  It must have been late June or early July, because he was hopping from branch to branch eating all my cherries.  I love cherries but I didn’t even care that he was eating all my fruit.  He was so dang gorgeous, I just wanted to watch him forever. 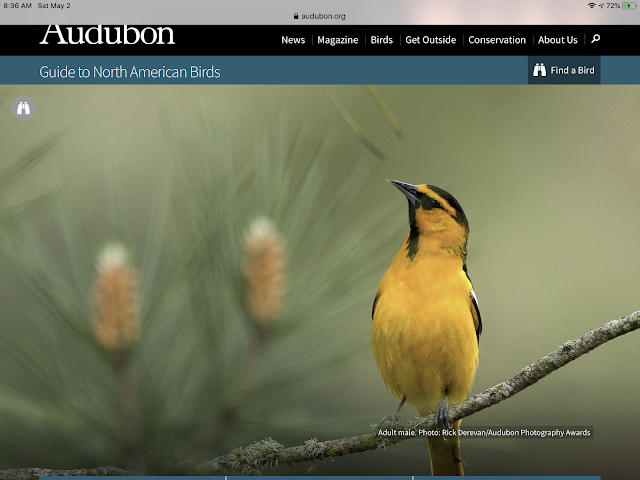 A few days ago, sitting on the front porch, I caught a flash of brilliant orange in the oak tree.  I watched an oriole hopped around amongst the oak branches before flying off.  I was sad to see him go.  But, this morning, while doing my breakfast dishes, I saw him on my garden fence.  I hope he sticks around for awhile.  Maybe he’s waiting for the cherries to get ripe.

I know its silly that a seeing a bird can make me so happy.  But there you have it.  Such beauty and brilliance make my heart sing.
Posted by Oak Creek Ranch at 9:04 AM 1 comment: