Remember a few weeks ago, Brett and I went kayaking at a beautiful lake high in the Sierras?  The trail head was packed and people told us that the hike was beautiful -- making a loop which included three lakes and fields of wildflowers.  Of course, we had to go back and make the hike. I checked a trail website and the trail was given five stars (accurate) and a rating of easy (not even close to accurate).  The trail started at Woods Lake, at 8200 feet elevation, and climbed to 9400 feet at the summit.  If we had known that the hike was three miles straight up, and then three miles back down, I'm not sure we would have attempted it.  Brett is doing great with his knee replacements but he wasn't at all sure that the supporting muscles were ready. 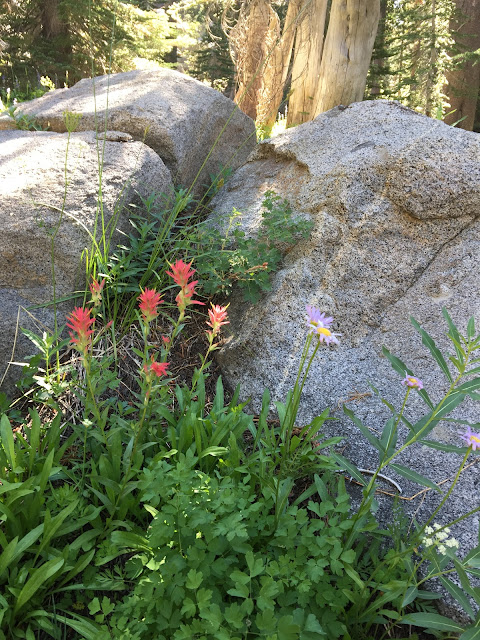 But, we were oblivious and so we set off from the Woods Lake trail head and started climbing.  After hiking through the pines, we came into a green valley.  The trail climbed at the base with a stream tumbling to our right, and wildflowers stretching up the hillside as far as we could see. 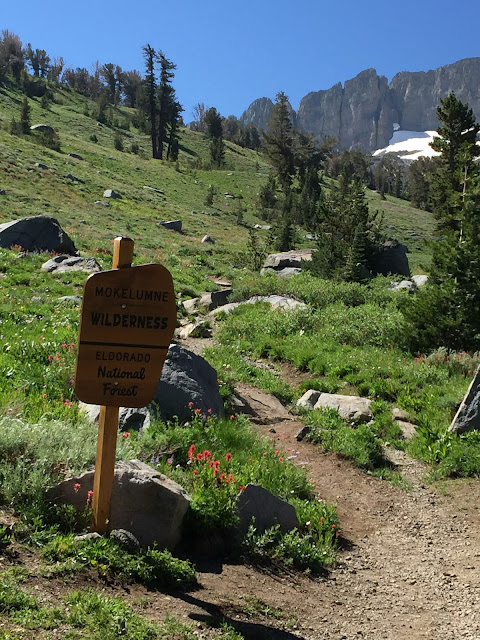 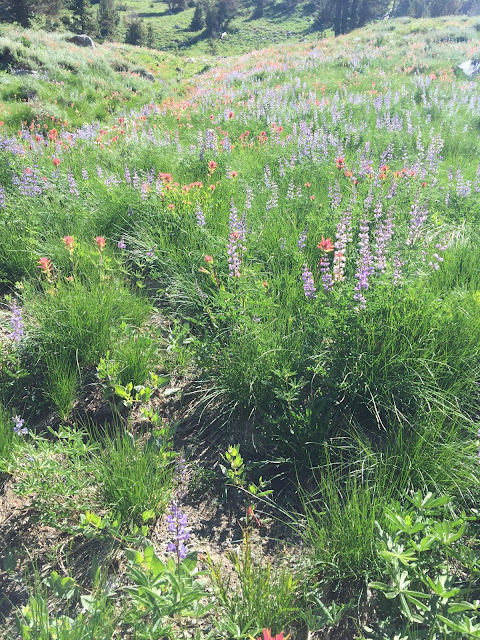 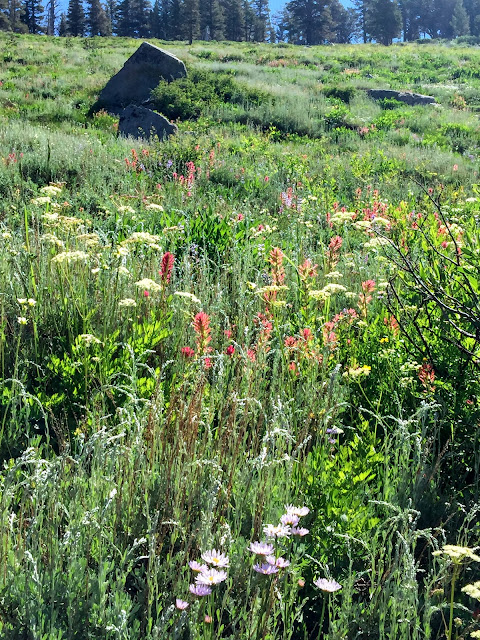 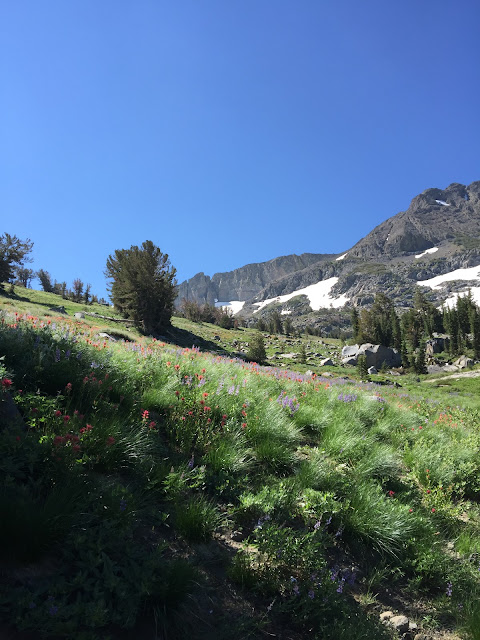 We reached Winnemucca Lake at lunch time.  Okay, it wasn't lunch time but we were hungry so we stopped and ate our lunch. 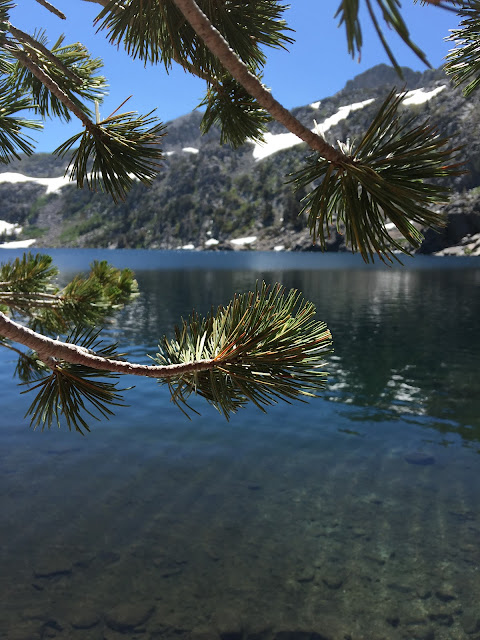 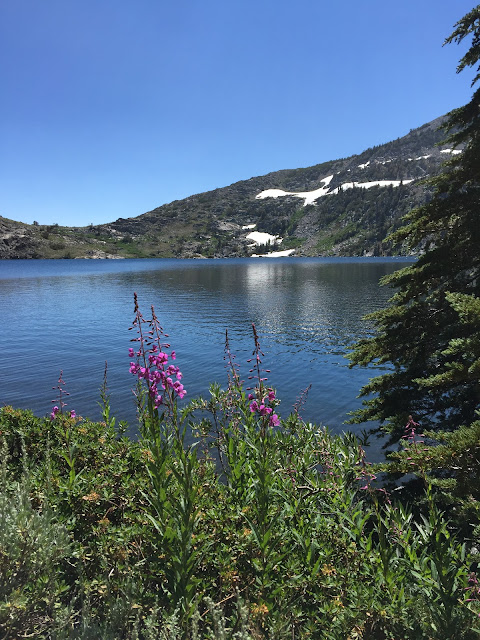 From Winnemucca Lake, the trail continued to climb.  Parts of the trail were still covered in snow. 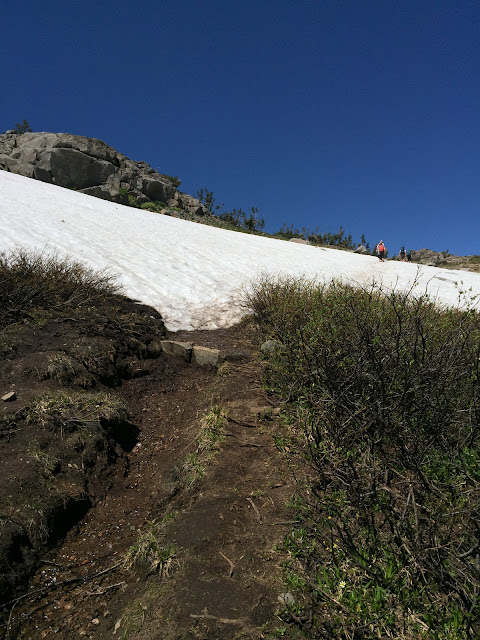 We came across these huskies who were leaping around their owner, full of joy and play, clearly in their element.  The owner let me take a picture, then he leaned back on his heels and the dogs pulled him across the snow. 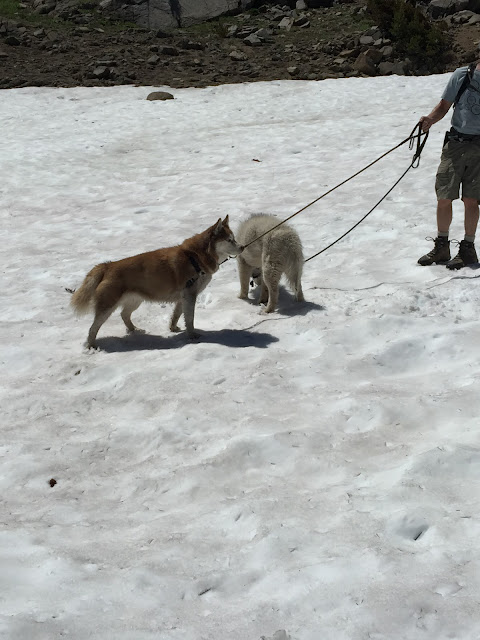 We stopped again at the summit and caught our breath. 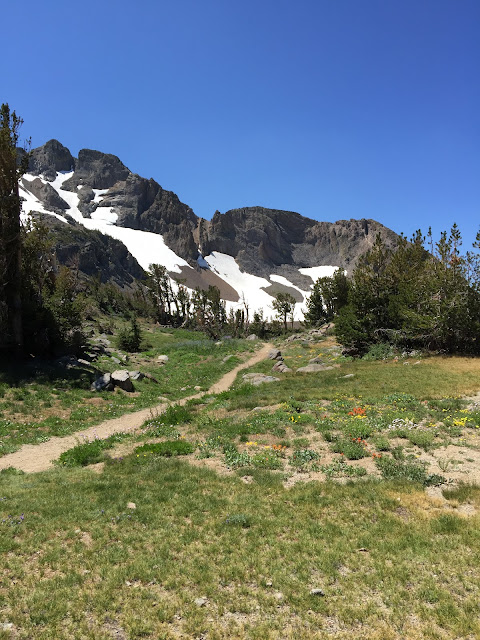 A short way further down the trail, we came to Round Top Lake.  There was a spur trail that went to 4th of July Lake -- but we didn't take it.  We were tired of climbing. 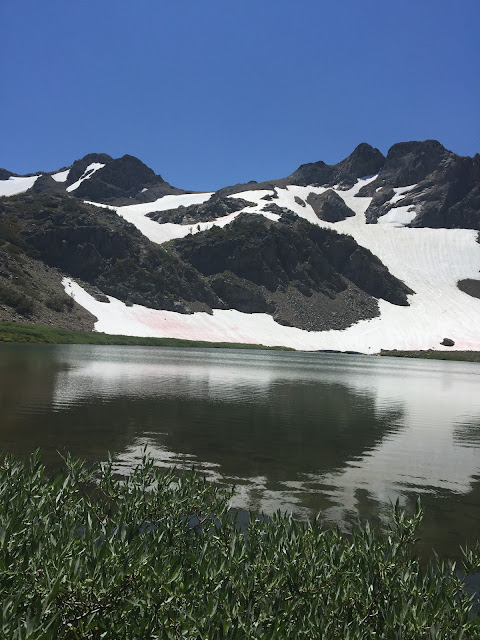 The trail back down to Woods Lake was also steep. 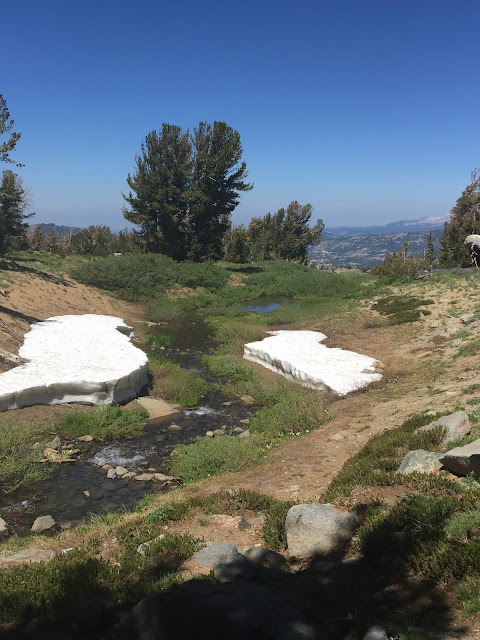 We had to cross another stream and the log, which served as a bridge, was a bit too high for Brett to comfortably use.  He wasn't sure that he could clamber up on the log and then stand without losing his balance.  So, he used the log as a handrail and stepped across on the rocks. We passed an old mine (there is a reason that this area is called the "Gold Country"); the mine opening (fenced closed for protection), the foundation of an old cabin, a rusty model T car, and other debris.  Brett was fascinated.  I can't believe I didn't take any pictures of it.

We will definitely take this trail again.  It wasn't easy, but it was do-able.  And worth doing again. 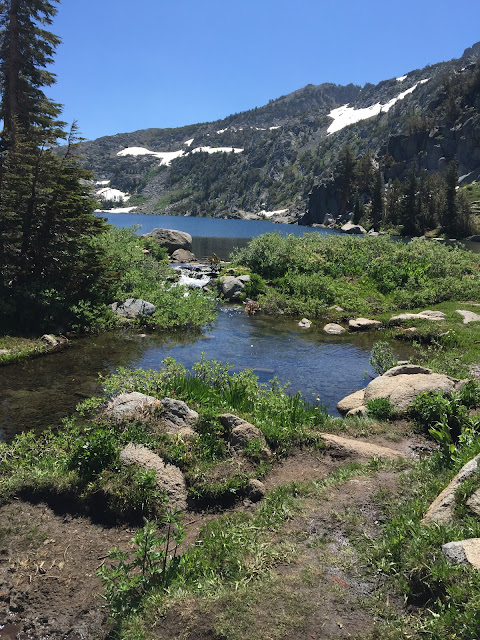 Awhile back Lytha said she would love to see a video of me working with Tex at liberty.  So, I enlisted Brett's help a few days ago, handed him my phone, loaded my pocket with cookies, and headed into the pasture.

The video is taken from outside the pasture because I was afraid that if Brett came in, it would distract Tex (Brett is a reliable source of treats).  I was also concerned that Flash would mob Brett -- and you can see that he did that even with Brett outside the fence.  There's quite a bit of Flash photo-bombing going on.

Tex and I have been building on our liberty work slowly.  I view it as an extension of the bond we are building and a way to expand its boundaries.  We are far from polished and we are probably not doing everything correctly, but it is our relationship and our bond.  So there.  What I've done is taken my initial work with him -- let me approach you, touch you, walk around you and mess with you -- and expanded it.  At first, I added "walk with me a few steps."  And, as that got easier and more consistent, we walked further.  Tex watches me enter the pasture, and then he turns and comes to me.  Sometimes, I get a goat as a bonus.  ...which is actually a big deal because Tex does not like the goats milling around me at all. Here's a very short clip of me going into the pasture and Tex turning:

We always end up at his feed bin (because he is often leaving his breakfast or dinner to hang out with me).  Sometimes, he marches along at my shoulder in perfect lock-step.  Sometimes, not so much.  This video captures a pretty typical/average session.  Sometimes, he walks next to me but sometimes he needs to think about it first.  For me, I don't care that he thinks about it first -- what I care about is that he chooses to join me.  Every time.  He always chooses to be with me and that feels awesome.

This weekend Kyle and Camille came up to visit with their significant others.  The occasion?  Our first annual lobster feed.  Yes, it was such a success that we decided to make it an annual event.

Kyle & Ana picked up Camille & Cody Friday night on their way over from San Francisco.  They arrived just before the pizza place closed.  Saturday, we headed over to Renwood for lunch and wine tasting.

Afterward, the kids continued down the wine trail while Brett and I headed to the market to pick up the seafood for dinner.  Brett set up the burner and pot in the garden -- it was far too large to fit on the BBQ. 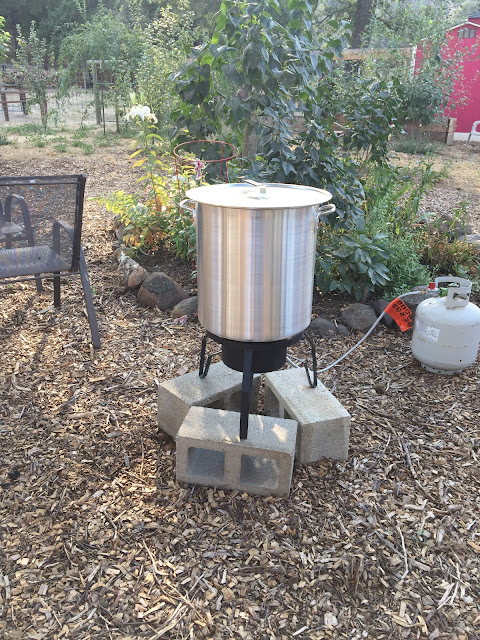 I layered in artichokes and potatoes, with water, wine and aromatics (lemon, celery, garlic, thyme). 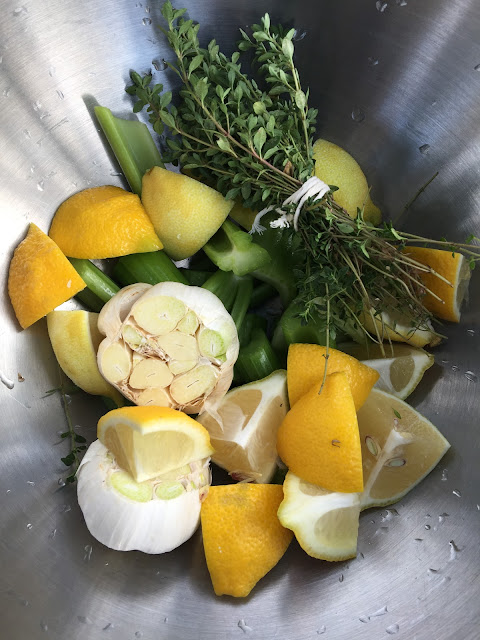 I added in sausages, lobster tails, prawns, mussels and corn.  We had a table set up in the garden (covered with butcher paper), tunes playing, SF sourdough brought over by Kyle and Ana, and wine on ice. 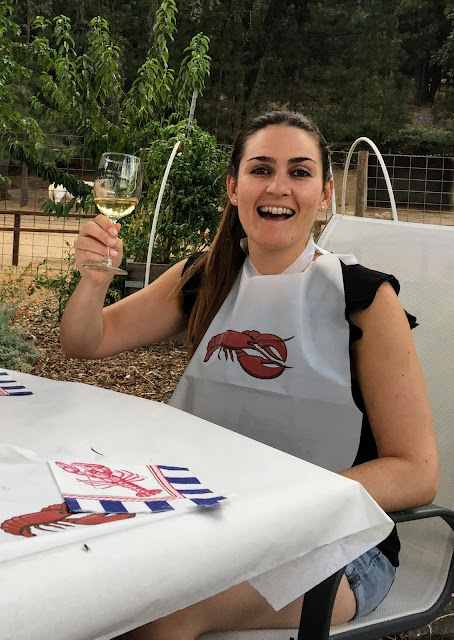 When the mussels had opened, Brett poured it all down the center of the table.

We had no plates, no utensils -- just bibs and fingers and lots of melted butter.  It was amazing. 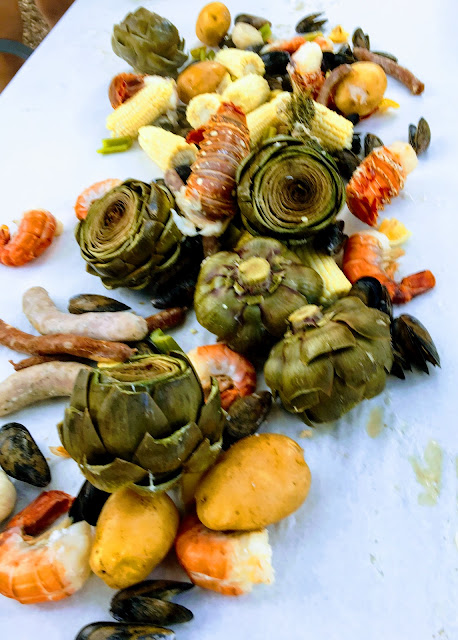 Sunday, we headed up into the Sierras with the kayaks. 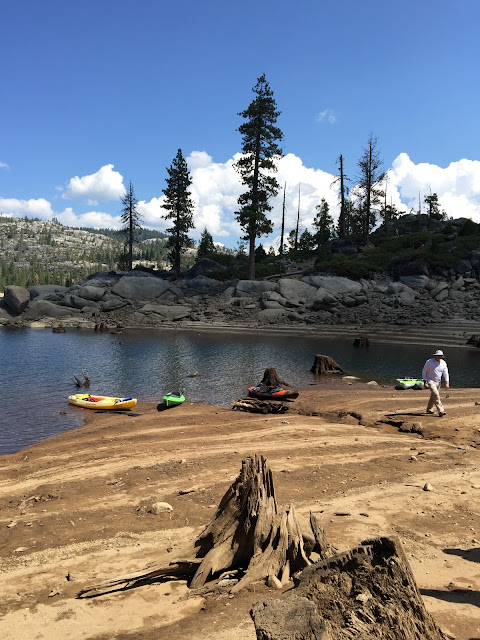 After a quick dinner of BBQ burgers and watermelon, the kids piled into Kyle's car and headed home.
Posted by Oak Creek Ranch at 8:26 PM 6 comments: