Hey everyone, I've moved my blog.  This platform (with our out-in-the-sticks slooooow internet) is not working well for me.  So, I'm now posting on Instagram.  You can find me there at OakCreekRanchNews.
Posted by Oak Creek Ranch at 11:33 AM 4 comments:

Friday morning, I filled Jackson's bucket with sweet senior feed and carrots.  No meds.  It was everything he loved (and shouldn't eat) and none of the stuff he hated (but had to have).  He was out in the small arena, on the damp sand -- another no-no -- no longer confined to his covered round-pen prison.

He finished his bucket, ate some hay, and then stretched out on the sand for a nap.  I sat on a small pile of wood, with my jacket zipped to my neck and my hands, gloved, and folded under my arms.  As the sun warmed the sand, he stretched his neck, rubbed his face in the soft ground, closed his eyes and groaned.  I unzipped my jacket partway.

A van rumbled up the driveway, with friends who were coming to help Brett cut up more of the oak, and Jackson sat, and then stood up.  The arena gate was wide open and I invited him to follow me out.  He slowly made his way along the side of the barn, towards the pasture where Tex and Flash were watching, grazing as he went.  At the fence, he and Tex rubbed the sides of their faces together a few times.  Flash approached, and both Tex and Jackson retreated.

Next, Jackson made his way to the front of the house where the men were unloading their chainsaws and other equipment.  He greeted everyone, checking for cookies, and then wandered off following the stream along the side of the house.  He circled back to the barn (still grazing as he went) and touched noses with Lucy, who was in her stall turnout watching.

Meanwhile, Tuffy had come to the fence in the donkey pasture.  Jackson reached his nose over the gate, and Tuffy stretched his nose up to meet him.  Finessa stood a few feet back, watching.

When the vet arrived, Jackson was up by the dressage court, grazing in the deep grass under the oaks and pines.  I slipped his halter on and we slowly made our way back to the barn.  Jackson likes the vet, and especially her assistant, so his relaxed mood never changed.  They loved on him for awhile, before giving him a sedative.  He went easily, peacefully, and quickly.  After he was on the ground, I knelt beside him with one hand on his withers and one on his neck.  I wept, sending all my love to him through my hands.  Brett knelt at his head.  Tuffy brayed.  And brayed.  And brayed.

Over the course of the weekend, we've been adjusting.  I tossed all his medication jars into the trash.  I scrubbed his vitamin bucket and put it away.  Brett drained his water trough.

All of the comments on my last post have been incredibly comforting to me.  There is a whole community who knew him, and understood him, and miss him too.  I am thankful that I have been able to convey his spirit to all of you over the years, and that you have understood.  I was one of the lucky ones, to have the gift of a relationship with a horse like Jackson.
Posted by Oak Creek Ranch at 11:33 AM 24 comments:

It's Hard to Say Goodbye

...even when you know it is the right thing to do. 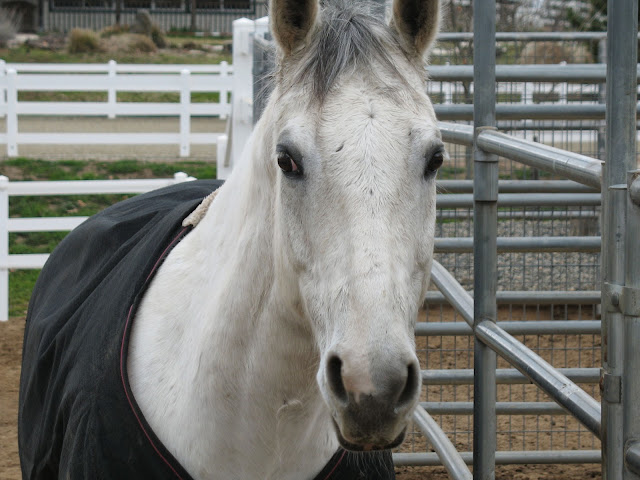 ...especially when it is your heart horse.

Jackson's white line not only didn't respond to treatment, it got worse.  He foundered. 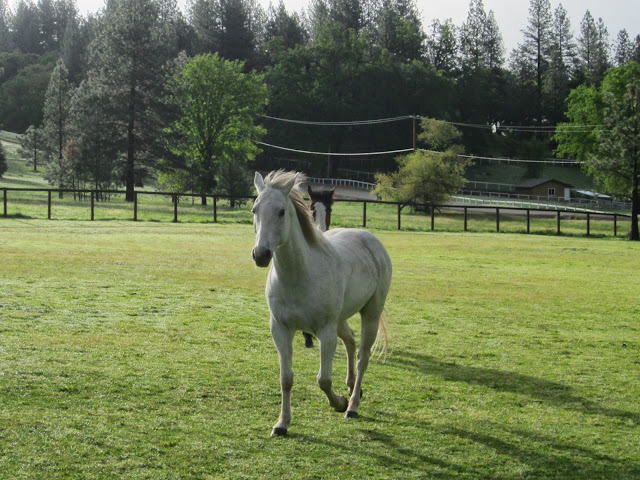 Jackson had more try than any other horse I've ever known.  When he said he was done, I had to honor that.

But, oh Lord, I will miss that horse.

My partner.  My friend. 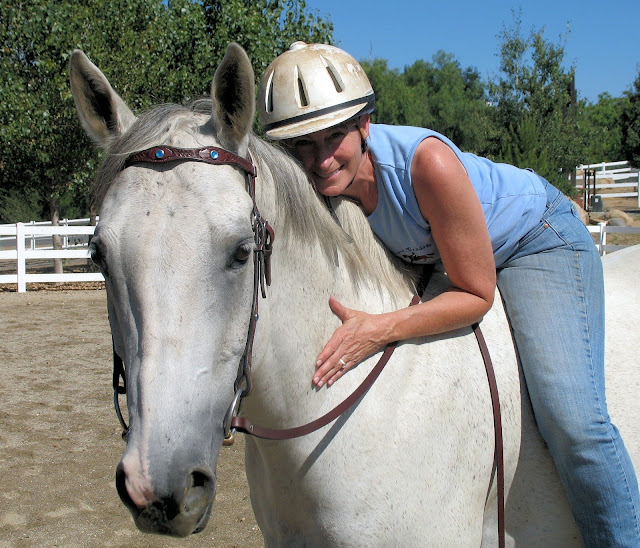 Godspeed, Jackson.  Safe passages and I'll see you some day on the other side of that rainbow bridge.
Posted by Oak Creek Ranch at 10:55 AM 37 comments:

We are finally getting some rain.  Today, we have one day of icy cold sunshine before the next storm arrives. 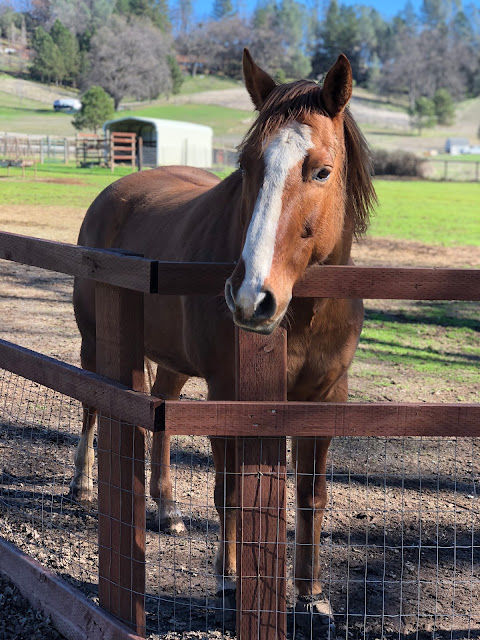 Pistol has the sweetest expression -- sort of, "why, hello there.  I'm happy to see you." 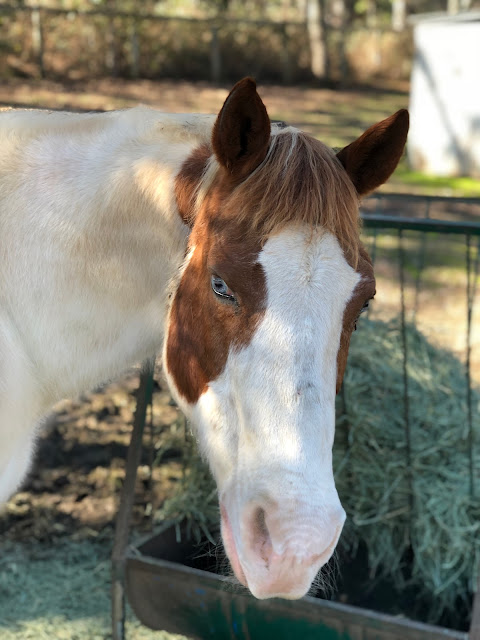 Lucy is sweet in her own princess sort of way too.  But its more like "Scratch my back, and I'll consider scratching yours.  But in the meantime, don't you dare touch -- or even look at -- another horse." 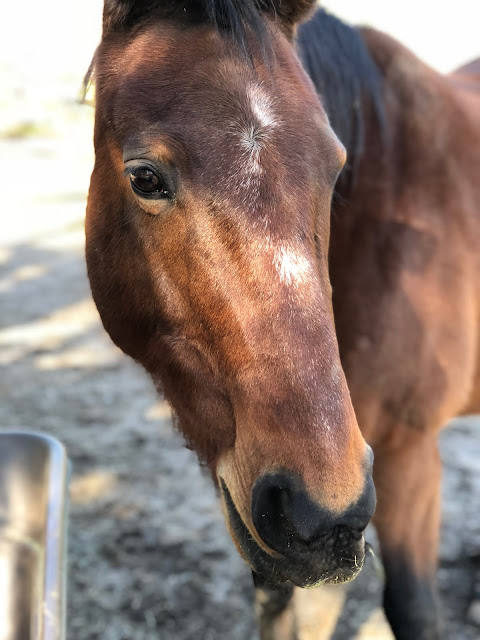 Once the ice thawed a bit, the birds enjoyed my new bird bath (Christmas gift from Brett). 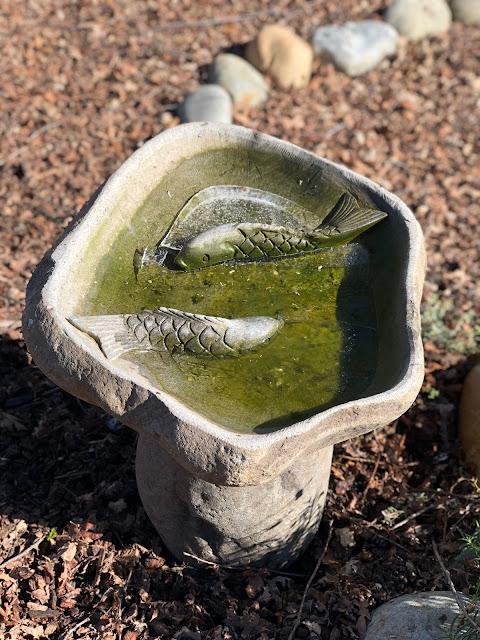 Another cold night tonight, then the rain returns tomorrow morning.  I'm going to bake bread and make a pot of soup.  What do you like to do on rainy days?
Posted by Oak Creek Ranch at 3:55 PM 2 comments:

Getting Ready for Rain

A couple small rain systems came through last week.  Nothing very cold or very wet.  But today, a substantial winter storm arrived.  We spent Sunday getting ready.  Brett clawed leaves out of the rain gutters and shoveled them out of the drain pipe where our driveway meets the road.  I added more straw to the goat shelter. 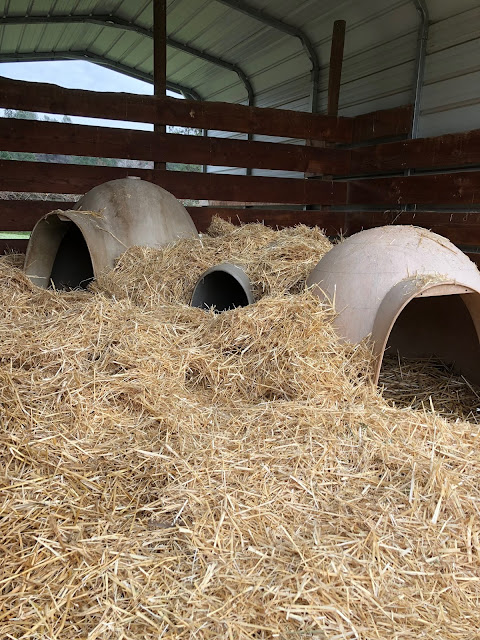 Before dinner, we brought the horses from their pastures to the barn.  Lucy and Pistol were led in first; Lucy wanting to prance but holding it together, and Pistol slowly walking behind.  Pistol will be 22 this year and in the past month we've noticed that she is walking slowly.  Her appetite is good, and her attitude bright, but she walks slowly now.

Brett led Flash to the barn next and then I attempted to lead Tex to the barn at liberty.  He was very tempted by the grass growing around the barn.  He struggled, but stayed.  Until we got to the barn door.  He stopped; he looked down the barn aisle; he looked at the grass; he looked at me -- pondered a minute and then walked off to the grass.  I followed. 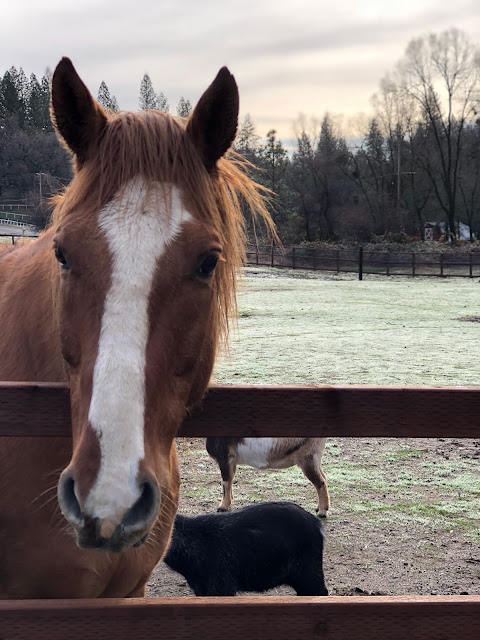 He had his head down, as I approached, under a maple tree behind Flash's stall run-out, when Kersey jumped up from where she had been sitting and dashed past him.  He was already feeling uncomfortable with me approaching to move him along and, as she flew by, he threw his head in the air, planted his feet and then pushed sideways, exploding into flight behind the turn-outs.  He stopped when he got to the corner, spun and stared at me with his head high and nostrils flared.

He trotted over to me and stopped, reaching his muzzle toward me.   I'm not sure if it was "sorry" or "save me" or "do you have a cookie?" -- I didn't really care about the reason; I was happy he had chosen to come to me.  It was getting dark so I slipped the halter, which was hanging from my shoulder, on and led him quietly to the barn.
Posted by Oak Creek Ranch at 7:14 PM 6 comments:

We've had Passage, our barn cat, since our early days at Aspen Meadows. 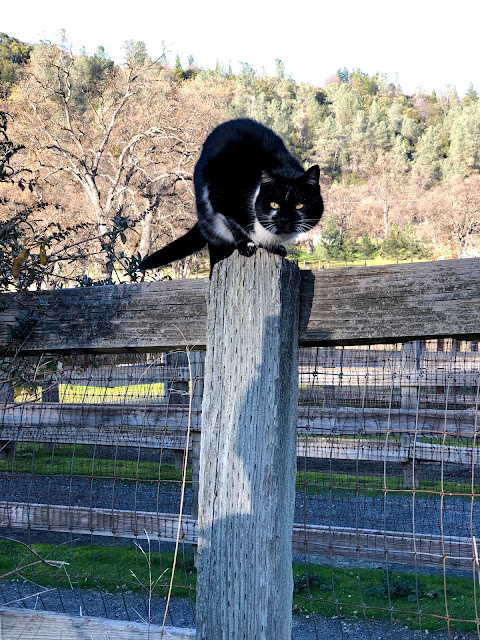 She made the move up here with us and quickly settled into the new barn.

I don't have many photos of her because she is always in motion. 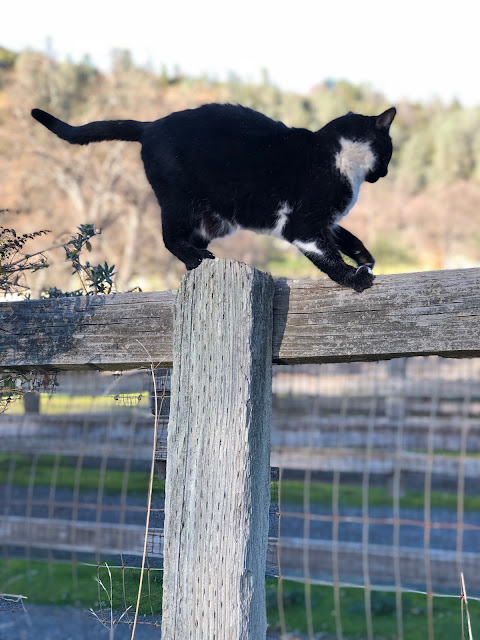 When we first got her, she was quite aloof.  Her mother had been a feral cat (dad most likely too), and she wasn't much interested in human company.  But, after we moved up here she became very affectionate. 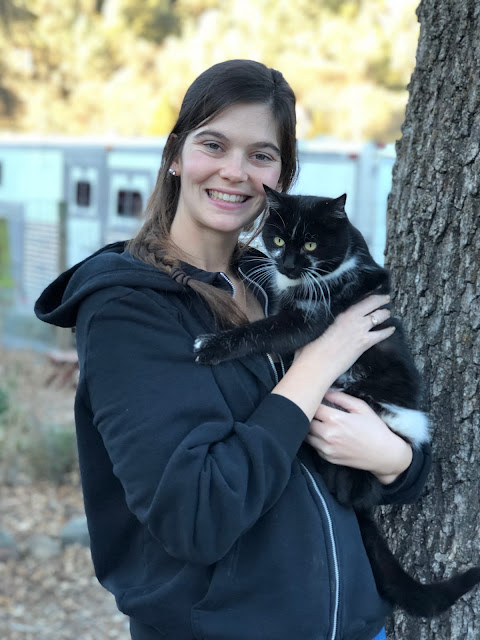 She follows me into the garden when I'm working there and complains until I take a break from pruning and hold her.  She will let just about anyone hold her now. 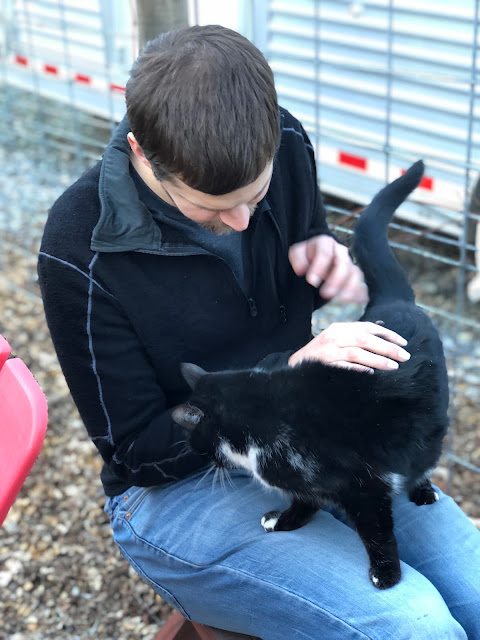 She even sits in Brett's lap.  He swears he hates cats, and she hated people -- go figure.  They adore each other now.

After Jackson's escape from his round pen, I thought a lot about his situation from both a medical and a mental health standpoint.  He is, of course, a medical mess.  His winter coat is particularly heavy this year, directly related to his Cushing's.  He turns slowly and painfully, and walks only in straight lines.  He is uncomfortable, if not in pain.  Some days, definitely in pain.  On good days, just uncomfortable.  His white line is not improving.  I worry about him making it through the winter.  I've known for a number of years that his days are numbered; this year I feel that number shrinking before my eyes at a rapid speed. 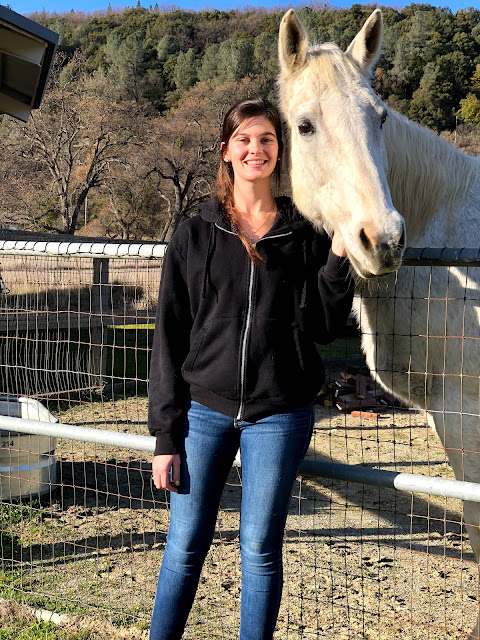 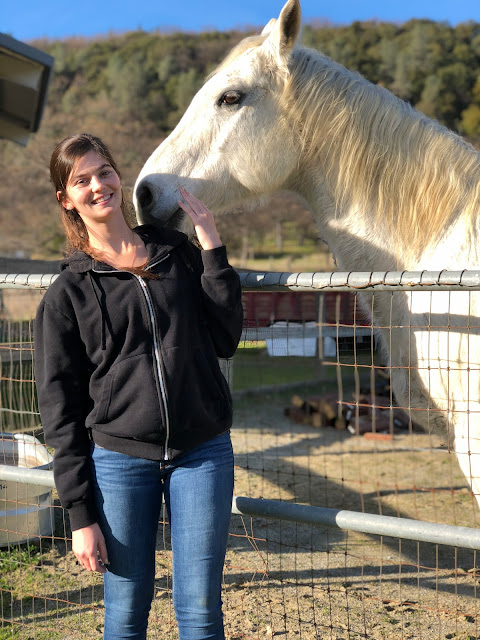 Being confined to the round pen feels cruel.  He hates it.  So, I decided to give him time outside, in the open air, on the almost-dry sand in the small arena, every few days.  It has made a huge difference in his attitude.  It may mean that we don't beat the white line.  It  may mean his remaining days shrink even more -- but misery is not a life. In the arena, he sweats a bit in his heavy coat even though the weather is not warm.  He nibbles on the grass trying to grow through the sand and around the perimeter.  He rolls.  And he meets me at the gate at the end of the afternoon, his eyes bright and his ears pricked forward, ready to go in for dinner. 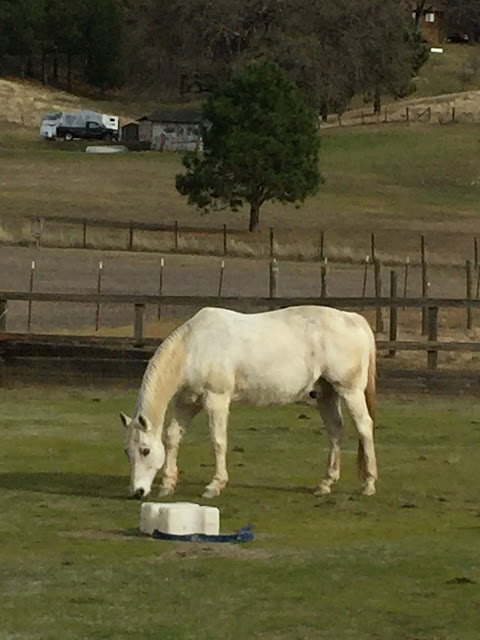 He thoroughly enjoyed his photo shoot with Camille.  The portrait shots were taken by Kyle's girlfriend, Ana, when she was up visiting a few days after Christmas.  She has a very cool portrait setting on her iPhone. 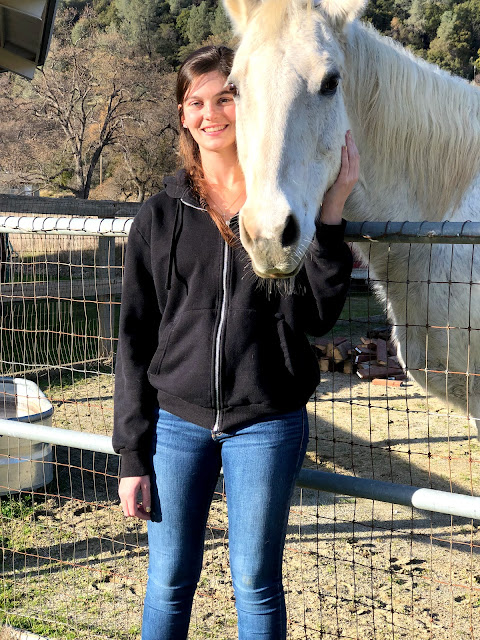