No Such Thing as a Free Horse

Those of you who own horses already know this to be true.  But, here is a reminder for those of you who need a refresher.
Back when I was a horse-crazy girl, growing up in a quiet suburban town in Southern California, my parents were offered a free horse.  They had a daughter (me) who spent all her money on Breyer horses and rental horses, and all her time at the neighborhood horse stable doling out sugar cubes and kisses.  I begged and pleaded for a horse.  For years.  My parents didn’t have a lot of extra money and there were three of us kids.  They surely didn’t have money to buy a horse.  But free?  Hmmm, worth investigating.  They received an education in the expense associated with owning a horse and quickly (and I like to think, regretfully) declined the free horse.  Although I didn’t think so at the time, they made the right decision.

We currently have a couple free horses on the ranch.  We took them both (Pistol and Luek) with the full knowledge of the financial outlay that any horse represents.

Yesterday, was an $800 day for Luek.  He has been off for about a week.  He also needed a blood panel done so that he could continue on his joint medication.  So, we took him to our vet for diagnosis of the hoof problem and blood work.  It turns out he has an abscess, most likely the result of a hot nail.  X-rays did not reveal any fractures or other issues.  X-rays for a horse are expensive, especially when they require sedation.  The blood work was normal relative to the joint medication (so we got a big bottle of that); however, he is anemic.  So, we are starting him on medication for that.  Fortunately, he is basically a healthy horse and these are pretty routine things that come with horse ownership.  Abscesses are very common and pretty easy to treat. 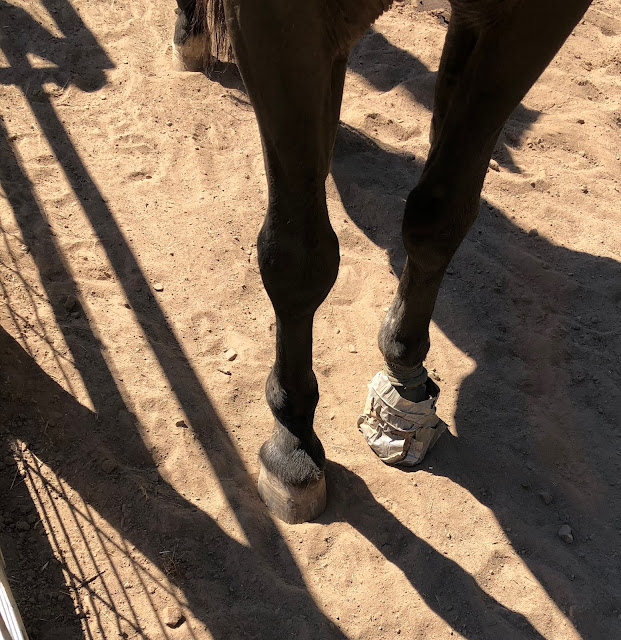 Luek enjoyed his foot soak in Epsom salts this morning.  While his foot soaked, I groomed him.  Afterwards, I applied a poultice and wrapped his foot.  Ten minutes later, he was filthy and the wrap was coming undone.  He has a history of abscesses, and he was a circus trick horse, so I’m sure he is also a master at undoing a foot wrap.  Not to brag or anything, but after all the years of dealing with Jackson’s abscesses, I am pretty dang good at wrapping a hoof.

...and the raccoons and the dogs... Cherries are ripe in the orchard and are in great demand amongst visitors and residents, both invited and not.  Cherries are my favorite fruit so I have, over the past six years, planted five trees.  The first two I planted, a Black Tartarian and a Ranier, are old enough to bear a nice amount of fruit.  Unfortunately, they both got sick a couple years ago with canker so I’ve been pruning out infected limbs each year.  The black tartarian was drastically cut back to the trunk — all limbs gone — but it has rebounded.  A couple of the new limbs had a couple of cherries.  The critters got to them first which is a bummer.  Black tartarian cherries are dark red, almost black, with a great flavor similar to Bing.  They also act as a pollinators for most other sweet cherry varieties.

On the Ranier, I cut off most of the limbs two years ago but left one that was only slightly infected.  The new limbs on that tree are covered in big, juicy, sweet cherries.  The diseased limbs have small leaves and small, sour cherries.  There are a lot of cherries on this tree; enough for all of us to share.  I’m hoping the birds and raccoons will eat the small, sour ones and leave me the big, sweet ones. 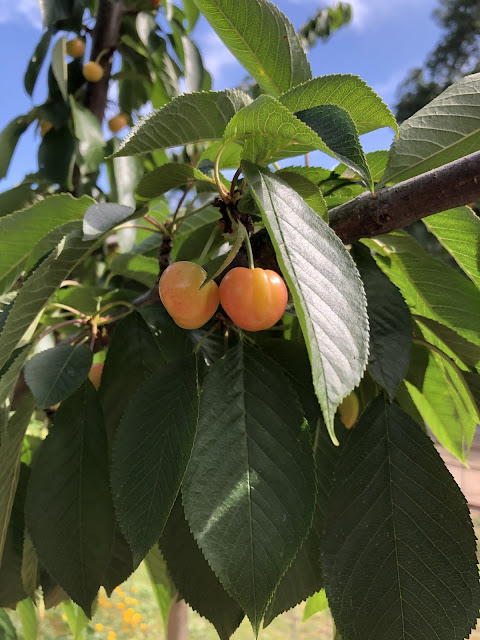 A third cherry tree had its first, small crop this year.  It is a Utah Giant which has cherries which look and taste similar to Ranier but are larger (hence the name) and I think have a nicer, more complex flavor than the Ranier.  My last two cherry trees are just a few years old so no cherries yet.

The cherries are particularly loved by Bullock’s orioles but I see other birds snacking in there as well.  I’ve been finding random cherries on the ground in the pasture so I’m not sure if birds are dropping them or other critters are doing so.  Yesterday, the bird bath was full of cherry pits.

I thought, what the heck?  Then I remembered that raccoons like to wash their food and figured that explained the pits and the toppled plants near the bird bath.  Sure enough, later I found raccoon scat under a pear tree — and it was full of cherry pits. 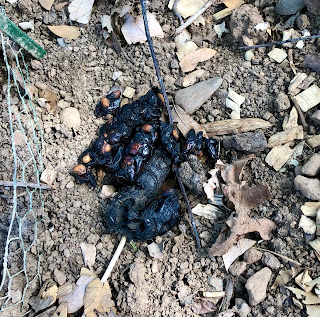 All the hard work I did earlier this year in the orchard seems to be paying off.  The trees all look healthy (except for the one diseased cherry limb which I will remove once the cherries are gone) and are loaded with fruit.  I didn’t fertilize them at all this year with anything other than a nice layer of composted horse manure under their mulch of wood chips. 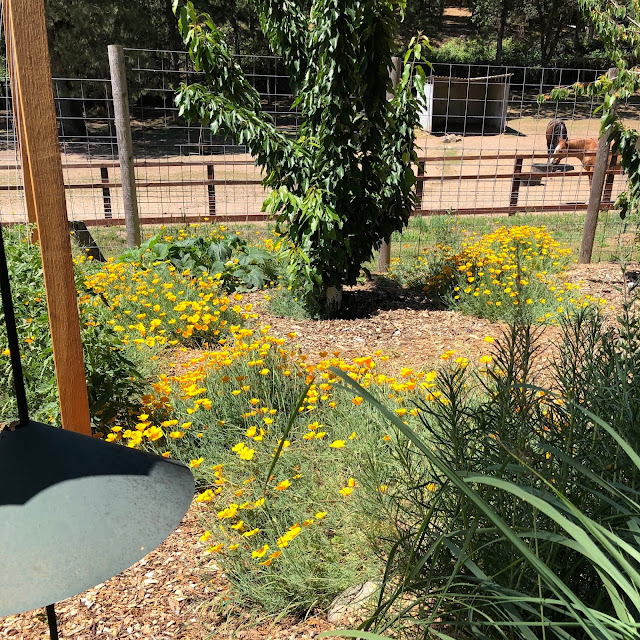