While Brett and I (and the animals) were evacuated and waiting to be allowed back home, we did a lot of thinking and talking about changes that we need to make given that we live in an extreme fire danger area and that we don’t want to move.  Despite the craziness, fear and discomfort of fire season, we love our little ranch and we love living in the mountains.

The changes we discussed included downsizing our herd and getting an RV so we have a place to stay in the event of evacuation.  Finding a place to stay when you have three dogs with you isn’t easy.  We were very fortunate to be offered a place to stay, with the dogs, this time.  There are no guarantees for the future and driving out the gate, and past the police barricade, with no idea where we were going to sleep that night was very stressful.

Some of you know that I drove a little BMW coupe to work, as my commuting car.  I figured that if I had a long commute on winding country roads, I might as well have a fun car.  Besides, I’ve always loved those cars.  When I retired, it spent most of its time in the garage.  I hardly ever drove it.  When we evacuated, I parked it in the middle of the arena and prayed it wouldn’t burn.  Brett drove his truck and I drove the CRV.  Brett has never asked me to sell my car, he knows how much I loved it.  So, he was surprised when I suggested that we sell it and use the money towards a RV.  If we had a trailer, we would have a place to stay in the event of an evacuation.  And, we’ve always loved to camp so we could do that as well.  That first step is done.  We sold my car and put a down payment on a RV.  And, I don’t miss the car at all.  I wasn’t sad when I sold it.  Not for one minute.  I guess the BMW driving healthcare executive persona just isn’t me anymore.

The second thing we decided to do is to downsize our herd.  We can’t fit five horses in our trailer.  It carries three comfortably, four in a pinch.  We had time to move all five this time but that was unusual.  And, who wants to be in the position of choosing who doesn’t get out?  Not us.

This past weekend, we took Luek down to his previous owner who lives on a huge cattle ranch on the Central Coast of California.  It was a very long drive, almost eight hours, but Luek trailered great.  He quietly munched his hay as we drove down the freeway and when we stopped for gas, he put his head out and let people pet him.  When we pulled up to the gate, he got very excited, stomping around and tossing his head.  He knew he was home. 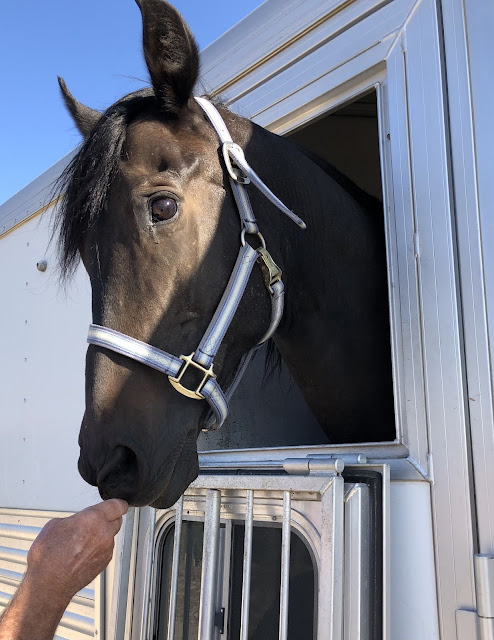 His owners’ granddaughter asked if she could unload him and put him in the pasture.   Green grass!!  …and a 12 year old girl to fuss over him.  We feel so good about this decision. 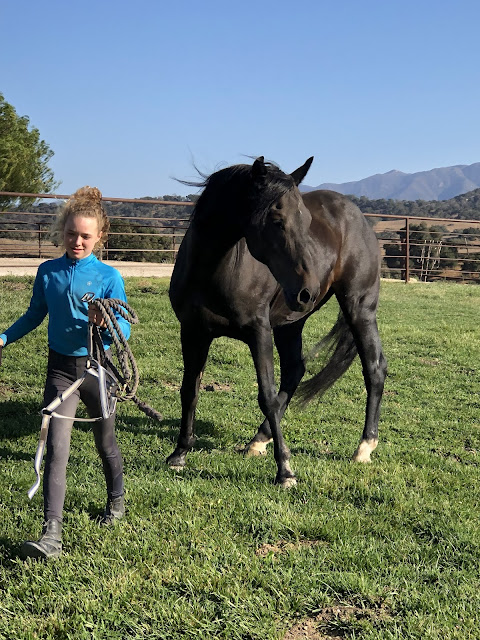