When we received the first evacuation warning, we packed our bags and started moving the horses.  It took a full day, but we got them all to a safe location, far from the fire.  The goats, donkeys, dogs, barn cat and chickens remained on the ranch with us.  We took the dogs with us when we got the mandatory evacuation order and left the goats and donkeys in their large, dirt pastures.

I requested that Animal Services come out and do welfare checks on the animals still at the ranch.  We were not allowed to cross the evacuation line and go check on them ourselves, but animal services was going from home-to-home and ranch-to-ranch and checking on animals, leaving food and water, if requested.  We got our request in the system first thing.

An Animal Services officer called me when they got to the ranch.  She strongly recommended taking the donkeys and goats to the evacuation site at the fairgrounds in Amador County, about 30 minutes from here.  I explained that the donkeys do not load well — it took two hours to load Finessa last time we tried. And the goats might run amok, looking for shrubs to eat and avoiding the trailer.  But, yes, they were welcome to try.  We chuckled to ourselves.  No way would they get the donkeys in their trailer.  A few minutes later, the same officer called and said that all the animals were loaded and they were headed out.  The donkeys walked onto the trailer with no trouble and they got the goats too.  We stared at each other in happy disbelief.

Later that evening, we got a call from the large animal evacuation site.  They had put the donkeys and goats together in the same pen.  They were at the fairgrounds so if you’ve ever been to the fair, and looked at the pigs and sheep and goats, you know the general size of the pen.  When they brought in dinner, Tuffy attacked Bear.  The donkeys and goats have been together before but only in a large pasture.  Tuffy has chased the goats a bit, but there was plenty of room for the goats to run away and Tuffy never chased them for long.    In the small pen, Tuffy was able to grab Bear leaving a very deep laceration on his side, just behind his front leg.  It was too deep to care for at the evacuation site so the on-site vet took Bear to UC Davis, a bit more than an hour away.  UC Davis provided free veterinary care at the evacuation site and for Bear that meant a trip to the veterinary school where he was stitched up, put on antibiotics and cared for.  After a few days, he was brought back to the evacuation site by one of the vets.  I received a detailed report of his treatment and discharge instructions.  A divider had been added to the goat pen (the donkeys were now in their own pen, further down the row) to create a safe, quiet space for Bear to continue his recovery. 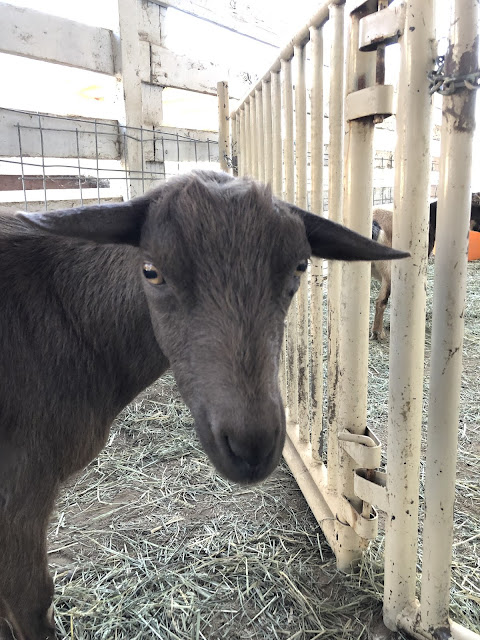 I was going down to visit the goats and donkeys every few days.  At first, I went every day.  The goats were very stressed.  In contrast to their usual life in a huge pasture, with no sounds except birds and the dogs barking at the occasional delivery vehicles, they were in a small pen with a couple of hogs next door.  The hogs were constantly grunting and squealing and sticking their snouts under the divider.  The goats hugged the far wall and looked at me with alarm.  The evacuation center was full so they had pens of more pigs, even some babies (so cute), sheep, goats, horses and donkeys around them.  Volunteers cleaned all the pens every day and fed the animals.  It was busy and loud and a bit overwhelming for the goats.  After a few days, they got used to the noise and activity.  When Bear was returned from the hospital, I sat with him in his space.  His stitches looked good and he was very happy to see me, baa-ing softly.  I sat on the ground, on a pile of hay, while he stood almost in my lap with his head pressed into my shoulder.

We brought the goats and donkeys home yesterday.  The donkeys came home first and loaded easily.  We’ve been working with them since moving up here, leading them around periodically, and they are much improved.  I guess we didn’t give them enough credit for being improved.  Finessa had developed an abscess in her front hoof and it was wrapped with a poultice (UC Davis vet again).  She had been given banamine (for pain) before we arrived and so she was gimpy but able to limp out to the trailer.  Once the donkeys were home and settled, we went back to the fairgrounds to get the goats.  I brought a bucket of mulberry branches, a favorite of the goats.  The volunteers helped us build a chute from the goat pen to the trailer.  I waved some mulberry leaves under their noses and they followed me right into the trailer.  In a few days, I will remove Bear’s stitches.  In the meantime, all the goats are enjoying the peace and quiet and space of their pasture.